When the land that would become Walworth County was divided by the act of the Territorial Legislature on January 2, 1838, the town of Delavan was formed in the southwestern quarter of the county. This region steadily grew around the settlements that are now the towns of Darien, Sharon, Walworth and the present town of Delavan. On February 2, 1846, the town’s borders were permanently established. Henry Phoenix and Col. Samuel F. Phoenix were the town’s first settlers. They were men of strong principles seeking to start a community pledged to temperance, sobriety, and faith. They believed they could build such a town here in the new Wisconsin Territory, which was mostly undeveloped in the early 19th century. In May 1836, the brothers began to explore sites in northern Illinois and then southeastern Wisconsin. They found that the lush green hillsides, the ample water supply from Delavan Lake, and the rich surrounding soil were perfect for their needs. Thus the town was born.

Delavan has a storied history steeped in circus myths and legends. By the middle of the 19th century, the nation was continuing its westward expansion, bringing circuses from the east to the young territories in the upper Mississippi Valley. In 1847, Edmund and Jeremiah Mabie, proprietors of the U.S. Olympic Circus, then the largest traveling show in America, chose Delavan for their winter quarters, a year before Wisconsin attained statehood and 24 years before the Ringling Brothers raised their first tents in Baraboo, Wisconsin. The Mabie brothers chose Delavan due to its ability to support the circus horses and other animals. These animals were the most important assets to the 19th century circus, both for transportation and performance. Delavan’s abundant pastures and pure water provided everything the Mabies required. The Mabie Circus stayed at the present site of Lake Lawn Resort on Delavan Lake, where it created a circus dynasty that survived in Wisconsin for the next 100 years. As time passed, the circuses grew in strength and numbers; hundreds of clowns and circus performers from over 26 circuses set up their winter quarters in Delavan from 1847 to 1894. The P.T. Barnum Circus, “The Greatest Show On Earth”, was founded in Delavan in 1871. But, as times changed so too did the circus era in Delavan. It came to an end in 1894 when the E.G. Holland Railroad Circus folded its tents. Except for a handful of local performers, who continued the tradition, the circus vanished from the community. Within a generation, the familiar ring barns and circus landmarks were gone. On May 2, 1966, the U.S. Postal Service selected Delavan to issue the five-cent American Circus Commemorative Postage Stamp. Today, more than 250 members of the old Circus colony are buried in Spring Grove and St. Andrew’s cemeteries. 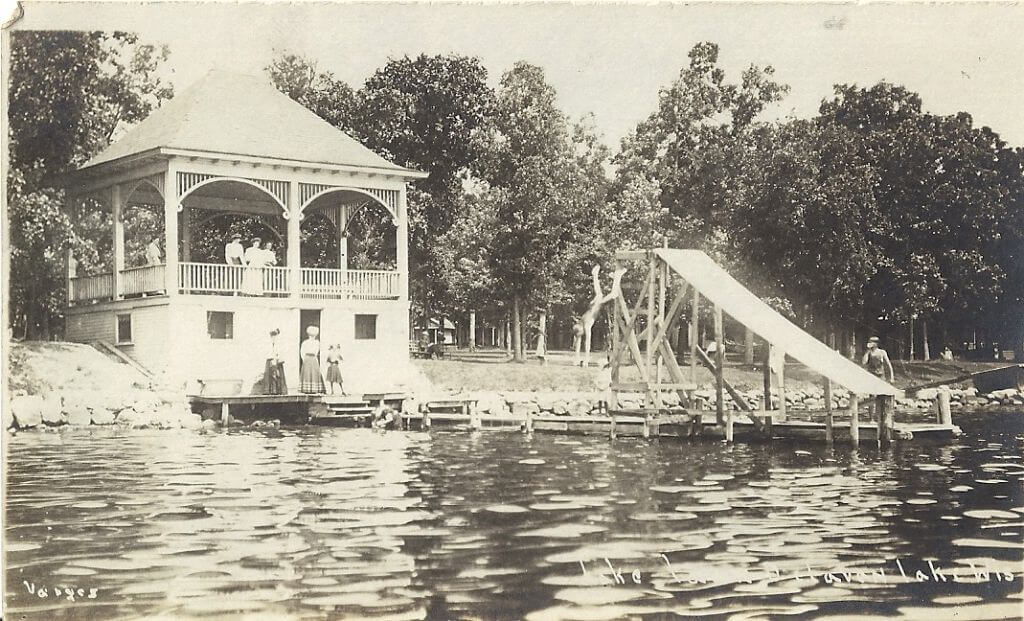 Delavan, one of Wisconsin’s early cities, has a rich nineteenth-century architectural heritage. From Greek Revival to turreted Queen Anne structures located throughout, Delavan is a showcase of Victorian architectural styles. The former Israil Stowell Temperance House, built in 1840 at 67 E. Walworth Ave., housed the Old Delavan Book Co. and is among the earliest homes from this period. It is listed on the National register of Historic Places. A set of Greek Revival row houses built between 1841 and 1845 stand just across the street. Phoenix Hall, an Italianate-style structure, rests amidst the more modern buildings of the Wisconsin School for the Deaf on Hwy.11, designed by E. Townsend Mix and built in the early 1850’s. Another prominent building designed by Mix is the Allyn Mansion at 511 E. Walworth Ave., built in 1885. Both are on the National Historic Register as well. The Queen Anne Latimer House, built in 1904 by another of Delavan’s prominent citizens, is well worth a visit.

For further reading on the History of Delavan, Wisconsin, please visit the website of our friends at the Delavan Wisconsin Historical Society at https://delavanhistory.org/